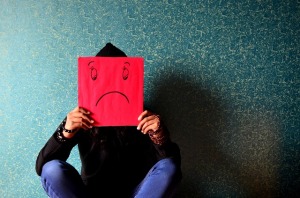 If you drive down a particular stretch of Interstate 80 outside Iowa City, you may be surprised to find a trio of giant faces staring at you from a cornfield. Angry Guy, Befuddled Guy, and Disappointed Gal are 12-foot tall cutouts created by artist John Cerney about eight years ago – an installation he calls Emoticons. Similar works can be found in fields along interstates winding through 23 other states.

Cerney took photographs of friends modeling different emotions, enlarged them, and then painted one-foot square panels that were assembled into the final art pieces. His inspiration came from an emerging online trend. He says “people were starting to use emoji’s online at that time, so I thought I would create three faces expressing those kinds of emotions.” It’s been one of the most negatively-received artworks he’s ever created. It seems people don’t like seeing faces that depict confusing or negative emotions.

Cognitive scientist Aleix Martinez says there 21 basic emotions. Six of these (happiness, sadness, fear, anger, surprise, and disgust) are called basic emotions, while the rest are combinations of these. A few years ago, Martinez’ team began researching facial expressions across cultures. In particular, they wanted to know if there was a common facial expression that signaled disapproval regardless of the spoken language used. It turns out there is.

They dubbed it the “not face” – furrowed brow, lifted chin, and lips that are pressed together. A mixture of anger, disgust, and contempt, this expression was repeatedly manifested in their research without prompting and across all cultural and language differences. In some cases, such as with those who communicate using sign language, the “not face” is the primary method for voicing displeasure. Speakers could use signing, or just shake their head, but even they tend to rely on the facial expression automatically.

During interactions, we gain more information from a person’s non-verbal behavior than we do their words. When we encounter a negative facial expression, for instance, we give more emotional weight to that than any positive statements the person might be sharing. In fact, we often pick up on facial expressions from several feet away; long before any words are exchanged and adjust our own emotional state (and our behavior) accordingly.

Burned into my memory is an encounter I had with an employee of mine many years ago. She timidly knocked on my door and asked if she could speak with me for a minute. She said “I’ve been wanting to talk to you for a couple of days, but the look on your face told me the time just wasn’t right.” I was shocked. I hadn’t been angry, or preoccupied. There was no reason why I wouldn’t have welcomed an interaction with her. Thinking about it now, it’s obvious that I’d just been walking around with my “not face” on.

So here’s what’s really been on my mind as I thought about this. What emotion does your face communicate at any given moment? Is it happiness, or the “not face?” How would people react to seeing a 12-foot tall rendition of your face on the side of the road?