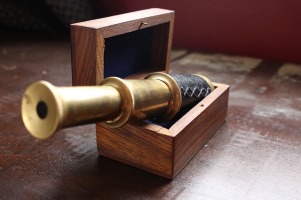 During the Battle of Copenhagen in 1801, part of the French Revolutionary War, British Naval forces descended on Denmark. The intent was to prevent the Danish fleet from joining with ships from Russia, Sweden, and Denmark. Britain maintained a superior navy, but a newly formed alliance of these four countries, called the League of Armed Neutrality, would threaten that position and negatively impact Britain’s ability to negotiate favorable trade agreements. By decimating Denmark’s contingent of ships, Britain would stave off a potential threat.

The fleet arrived on March 30th under the command of Admiral Hyde Parker and his second-in-command Vice Admiral Horatio Nelson. Parker had a reputation as a cautious strategist and moved slowly, in stark contrast to Nelson; a man who preferred quick, decisive action. Nelson’s exploits had made him a war hero, and he remained a highly trusted officer, despite having been blinded in one eye during one of his earlier battles.

The British found the Danish fleet well prepared for their arrival thanks to Parker’s delay. They had moored their ships just off the cost, creating a defensive wall which would prevent any single ship from being targeted. The arrangement of ships in the harbor allowed their forts, armed with twice the guns of a typical ship, to join in the battle as well. In addition, this allowed for supplies and repairs to be coordinated from land without fear of attack.

It was decided that Nelson would lead the attack on April 2nd with 12 ships. These were smaller, and more maneuverable in the shallower water, but less heavily armed. Parker would command the heavier ships in deeper water preventing any Danish allies who might arrive from cutting off retreat. He would also engage the forts and other land defenses with his more formidable artillery.

Almost before the battle began though, three of Nelson’s ships ran aground. Without charts of the area, they had only last-minute soundings to gauge the depth of the channel. There was no time to regroup though as Danish forces began firing. Soon, Nelson’s ships were fully engaged and by 1 pm the battle was in raging all along the line.

Outside the channel, Admiral Parker could see little. The smoke made it difficult to tell what was going on, though he could see flag signals from the three grounded ships. Given Nelson’s depleted fleet, the lack of visibility to the front, and his inherently cautious nature, Parker ordered his flag captain to signal retreat at 1:30 pm.

However, retreating at this point in the battle would have exposed Nelson to heavy fire and would undoubtedly been disastrous. Informed of Parker’s order, Nelson turned to his own flag captain, Thomas Foley, and said “You know Foley, I only have one eye – I have the right to be blind sometimes.” He then raised his own telescope to his blind eye, saying “I really do not see the signal,” and continued the attack. By 2 pm, The Danish were defeated.

Nelson had triumphed, and in the process provided us with a commonly used idiom. Today, we use the phrase “turning a blind eye” when describing someone who ignores undesirable information.