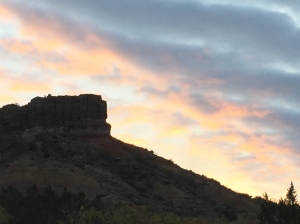 Let me tell you about Tom from Kansas City.

I had joined our Boy Scout troop for a weekend of mountain biking in Palo Duro Canyon State Park. The mornings were a little chilly; but once the sun came up, the weather was perfect for exploring the trails and viewing the wildlife. Saturday evening, as the scouts prepared dinner, I decided to take a short walk around our campsite to stretch my legs and hopefully ward off some of the stiffness that tends to follow my increasingly infrequent exercise.

The rear driver-side wheel had fallen off of the van. The axle had dug into the asphalt for several feet, destroying the brake assembly and leaving this poor guy stranded. The look on his face told a story of desperation and fear. It was growing dark fast, and without cell phone service on a Saturday night in the canyon, help seemed a long way off.

I introduced myself and, as you have deduced by now, this was Tom. He was in the middle of a solo road trip and had planned to camp in the canyon. The park was full though, so he had opted for a quick drive around before heading into the nearest town to find a good spot for the night. On his way out, the lug nuts holding his wheel in place had given way. He’d managed to find the wheel and roll it over the van, but a recent heart attack had left him weak and unable to do much else.

As we talked, several cars drove by; day visitors on their way out of the canyon. No one, Tom said, had stopped to help. There are all kinds of reasons not to stop and help someone in need; but, if we’re honest, most of them are excuses. I’ve used plenty of them myself.

“Someone else is probably already helping out.”

“I probably don’t have the expertise to be of any good.”

“I don’t want to get my hands dirty.”

The problem is, none of these excuses ever made me feel better about passing by. The times I’ve decided to move along, head turned to avoid uncomfortable eye contact, my mind always returned again and again to the thought that I should have stopped to help. Maybe I could have done something – maybe not – but I should have tried.

Opportunities to lend a hand are all around us. And they don’t always come in the form of someone stranded on the side of the road. How about the coworker who needs some encouragement? What about the friend who could use a sounding board? You don’t have to be an expert to be a help. You just have to be willing.

Have you ever noticed how, following some sort of calamity, discussion inevitably turns to stories of people who stepped up to help? Natural disasters and terrorist attacks all seem to bring out the best in people as unsung heroes emerge from the shadows to help out their fellow man. People feel compelled to travel thousands of miles to deliver aid to others impacted by hurricanes and floods. Why then is it so hard for us to be the everyday hero to those within arm’s reach?

The human experience is made up of thousands of individual interactions, each one of them an experience in itself. Let those pass you by and life seems emptier…colder. Embracing them though, especially the dirty, messy, uncomfortable ones, adds a richness that can’t be described.

With the help of my son, a fellow scout dad, and Jacob (another traveler who decided to stop and help), we eventually got Tom back on the road. Our hands got dirty, but we worked and laughed together; sharing the experience willingly, while cars continued to pass us by. We shook hands and Jacob followed Tom into town to make sure our iffy repairs held while the three of us returned to camp. By this time, dinner was cold, and the rest of our party asked why we were so late.

I think we had a pretty good excuse.