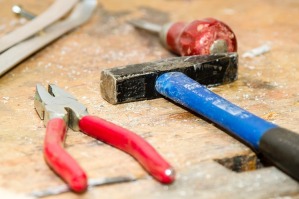 In 2004, researchers flying over a Scottish field made a startling discovery. The team, working for the Royal Commission on the Ancient and Historical Monuments of Scotland (RCAHMS), were photographing the landscape in order to update their catalog of various archeological sites. As they passed through an area known as Warren Field, they spied some unusual markings in the crops below, variations in the terrain that would not have been noticeable at ground level.

When a team later arrived to investigate, they discovered evidence of an ancient calendar carved into the ground. Twelve pits, arranged in an arc, appear to have been created in order to track the movement of the moon as it tracks across the sky over the course of the year. These pits vary in size and shape, mimicking the moon’s appearance, and were created 10,000 years ago – well before the earliest known formal calendars were created in Mesopotamia.

Today, calendars are a staple of human existence. They’re everywhere – on our walls, desks, refrigerators, computers, and even the cell phones constantly at our side. We’ve perfected timekeeping to the point where clocks automatically update and maintain incredible levels of accuracy. But for all of the advances we’ve made in tracking the passage of time, we’re not very good at using it.

It’s rare that I talk to someone who says they have plenty of time on their hands. Most people spend the majority of their day jumping from task to task without ever feeling like they make headway. They’re stressed and worn out from constantly trying to dig themselves out of a hole – a time hole. And a lot of that stems from the way they use (or fail to use) their calendar.

Most people only turn to the calendar when it’s time to schedule events that involve other people or a serious deviation from their normal schedule. Events include meetings, conference calls, work trips away from the office, and vacation. Items that don’t involve others, and therefore don’t have specific time parameters around them, wind up on a to-do list. This list represents all the things we need to get done and serves as a constant reminder that we can’t relax. As long as items remain on the to-do list, we have pressing work to do and, as the list grows, so does the stress.[Tweet “It’s time to rethink our approach to the calendar.”]

It’s time to rethink our approach to the calendar. By unlocking its potential, we can regain a sense of control over the day and relegate the to-list to its proper, less prominent, role in our lives. Follow these steps to transform your workday.

An approach like this does take discipline, but then all things that matter do. You have to actually honor the appointments you’ve scheduled and spend the designated time working on the assignments you’ve made. Going forward, you’ll have to discipline yourself to scheduling important tasks on the calendar. Only the quick and easy stuff makes it to the traditional to-do list.

We only have so much time. Man has yet to find a way to generate more of it. That means we have to be good stewards of the time we have. You can either choose to take control of your day, or let the day control you. How valuable is your time?