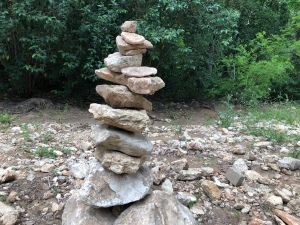 While out for a hike recently, I came across this stack of rocks. It reminded me of something I heard once about the Scottish Highland clans. According to legend, as armies would march to battle, each soldier would place a rock onto a pile. Those who returned home removed a rock, with the rest forming a memorial to the fallen.

Stacks of rocks like this, traditionally called cairns, have been around since the beginning of recorded time. In addition to memorials, assembled rock formations like this have been used to indicate buried supply locations or to mark trailheads and pathways, as in the case of the one I came across. The Inuit people of the Arctic in particular used them as landmarks given the vast, bleak terrain.

More recently, stacks of rocks have been used for more introspective reasons. Climbers add to cairns when they reach a mountain summit as a celebration of the accomplishment. Some people find the act of balancing rocks to aid in meditation. Others ascribe religious meaning to the practice. For some, it’s seen as a form of art.

We all stack rocks, don’t we? We all engage in labor that can feel like we’re just picking up stones and piling one on top of the other. Work can often feel monotonous. We answer the same questions. We make the same phone calls. We process the same transactions and have the same conversations with the same people. It can be rather frustrating at times, can’t it?

But regardless of which rocks we’re stacking, it’s important to periodically focus on why we’re stacking them. What we’re working for – and toward – is as important as the work itself. Take a moment and ask yourself…

In Aruba, the act of stacking rocks became so prevalent that last year The Island Hotel & Tourism Association officially asked visitors to stop. Somehow the idea of stacking rocks became associated with making a wish. Beaches and trails have become littered with these formations, to the point that the natural habitat of indigenous wildlife is being disrupted.

In some cases, you see, stacking rocks is a meaningless exercise. It’s a waste of effort – just like making wishes. Pictures I’ve seen of the rock stacks in Aruba indicate that they were hastily thrown together. They aren’t very big and it looks like very little effort went into building them. No thought was given to the impact these cairns would have on the environment or those who would come after.

Work without purpose isn’t just an empty exercise for the laborer, it can actually be detrimental to the team and the organization. When someone else is simply going through the motions, errors occur. Details are missed. Repairs have to be made and work has to be redone. Everyone stacks rocks; but not everyone is building something.